The 4 most dangerous jobs in America and their average settlements 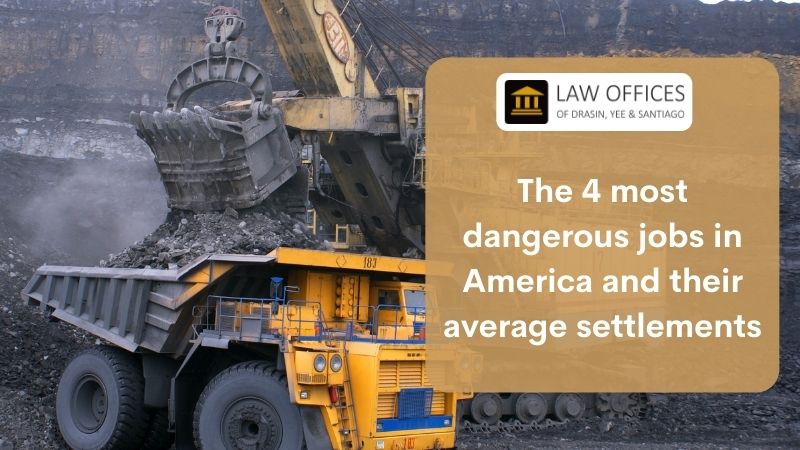 Workers’ compensation insurance can be an excellent way for employees to protect themselves in the event of an on-the-job injury. However, some jobs are considered more dangerous than others, and employees in these positions may be at a greater risk of injury.

Working inside the United States is a risky proposition. Based on the recent numbers from the Bureau of Labor Statistics, there are more than 4,500 occupational fatalities annually. While certain professions inherently carry more risk than others, it’s important to remember that any occupation can be deadly if workers aren’t careful.

Dangerous jobs in the United States are :

Coal mining is one of the most risky jobs inside the United States. The risk of injury or death is high, and coal miners often have to work in hazardous conditions. Injuries and fatalities are not the only risks coal miners face. They also face the risk of developing black lung disease, a severe and often-deadly lung disease caused by breathing in coal dust.

Black lung disease is entirely preventable, but it is still common among coal miners. With resurgence in black lung cases, many coal miners are now dying from the disease in recent years. Coal miners’ families are entitled to compensation in case of the workers’ demise.

The average coal miner injury settlement is around $225,000. It is vital to realize that those numbers are simply averages, and every case is unique.

In the United States, there are approximately 4.5 million commercial fishers. Of those, an estimated 2,000 are injured on the job each year. That’s a pretty staggering number, especially when you consider that these injuries were preventable with proper safety precautions in place.

Commercial fishers face a unique set of risks on the job. From working in extreme weather conditions to handling dangerous equipment, these workers put their lives on the line every day. Injuries can occur in a variety of ways, including:

– Being struck by objects

The average compensation that you may be able to receive for a fishing work injury is around $5,000 or more.

Logging is a dangerous job. The work is highly physically demanding, and the hours are long. Injuries are common, and many loggers have musculoskeletal disorders, including back injuries, carpal tunnel syndrome, and other chronic conditions.

In the United States, logging is one of the most dangerous occupations. Based on the Bureau of Labor Statistics (B.L.S.), in 2016, logger fatalities were more than twice the national average for all occupations. The significant causes of death were from contact with objects and equipment (35%), transportation accidents (27%), and falls (20%).

According to the Bureau of Labor Statistics, Loggers have a work injury average settlement of $172,000. This high number is due to the many dangers that Loggers face on the job.

It is important to note this calculation is a mode of thousands of cases.

If you wish to know how to avoid mistakes while filing a Workers’ Compensation Claim, refer here.

If you get injured at work, you will be entitled to compensation. Work damage claims may be complex, and it’s critical to talk with an skilled Workers’ Compensation Attorney who let you understand and recognize your rights. Contact D.Y.S. Law at (213)855-4749 today to schedule a free consultation, and we will help you get started on the road to recovery.