A List Of 5 Occupational Diseases That Are Hiding In Your Workplace. 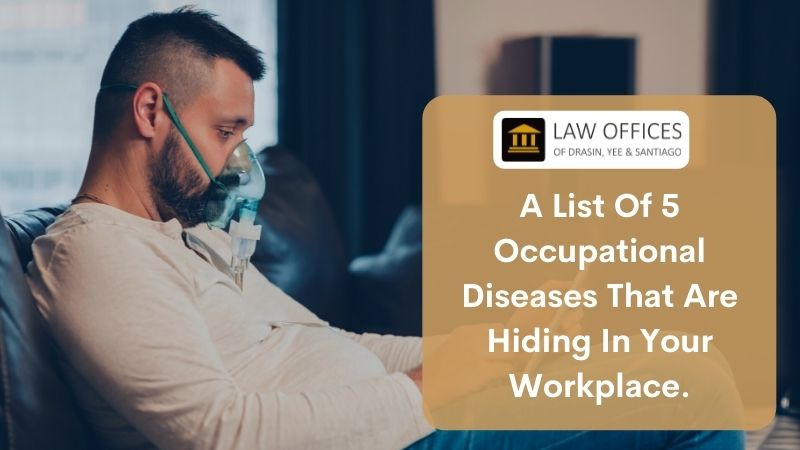 Occupational Diseases are defined as health conditions caused by the work environment, such as specks of dust and vapors. The most common occupational disease is noise-induced hearing loss, which affects about 10% of the working population. The other commonly reported occupational diseases include Lung cancer, Mesothelioma, Asbestosis, Silicosis, Radiogenic cancers, Oncogenital malignancies, Cardiopulmonary diseases, and Musculoskeletal disorders.

Occupational Disease is also known as Occupational Illness or Work-Related Illness. An occupational disease is any disease caused by either workplace exposure to a harmful substance or the repetition of physical activity. As they are often linked to workplace hazards, working conditions and individual lifestyles usually causes occupational diseases. They can be divided into two categories: chronic diseases and acute diseases.

Chronic occupational disease is any condition that develops over time through repeated contact with an agent, which causes symptoms to appear.

To learn more about Occupational diseases, visit our blog now.

An occupational disease is a severe problem in today’s workplace. According to the USA Labor Department, over 50% of all occupational fatalities result from people being exposed to hazardous substances at work. The effects of this issue are also not restricted to fatality. Roughly 5% of all current workers suffer from an occupational disease.

Many occupations carry a significant risk of occupational disease. They include:

Asbestos is a naturally occurring mineral that has been used in a variety of commercial products such as cement and insulation. Asbestos was utilized in a whole lot of the thing in the past century. It’s resistance to heat and fire made it ideal for construction materials. Unfortunately, asbestos exposure can lead to serious health problems.

The World Health Organization states that all forms of asbestos cause lung cancer and are also associated with other carcinomas such as mesothelioma and cancer of the larynx and ovary.

Benzene is a colorless, flammable liquid that evaporates readily into the air. Benzene is found in industrial settings and gasoline exhaust.

Exposure to benzene has adverse health effects to those who interact with it. Benzene affects nearly every organ in the body and has been linked to non-Hodgkin lymphoma and leukemia. The most common exposure to benzene is from breathing air containing benzene; however, skin contact is also a common

Hearing loss is one of the most common chronic medical conditions in America. Hearing Loss affects more than 36 million people. It is estimated that 10% of industrial workers, who use noisy machinery and equipment, are exposed to dangerous noise levels on the job.

Noise-induced hearing loss is a severe problem for more than 25 million American workers. It costs employers $242 million each year in workers’ compensation claims and $900 million in lost productivity.

Musculoskeletal Diseases result from overuse or trauma to the physical structure of the human body. Either physical or chemical factors can cause these disorders.

Musculoskeletal diseases affect 50-80% of people in their lives; these disorders have been found in workers who perform manual labor, such as those who work in construction, agriculture, and other labor-intensive industries.

It is essential to understand the claims process if you have exposed to occupational diseases while working. Specific steps need to be followed to get properly compensated for your disease. Experienced Workers’ Compensation Attorney at DYS Law Group can help you with your lawsuit.

Contact us today at (310) 473-2355 to get your free evaluation with experienced Workers’ Compensation Attorneys.